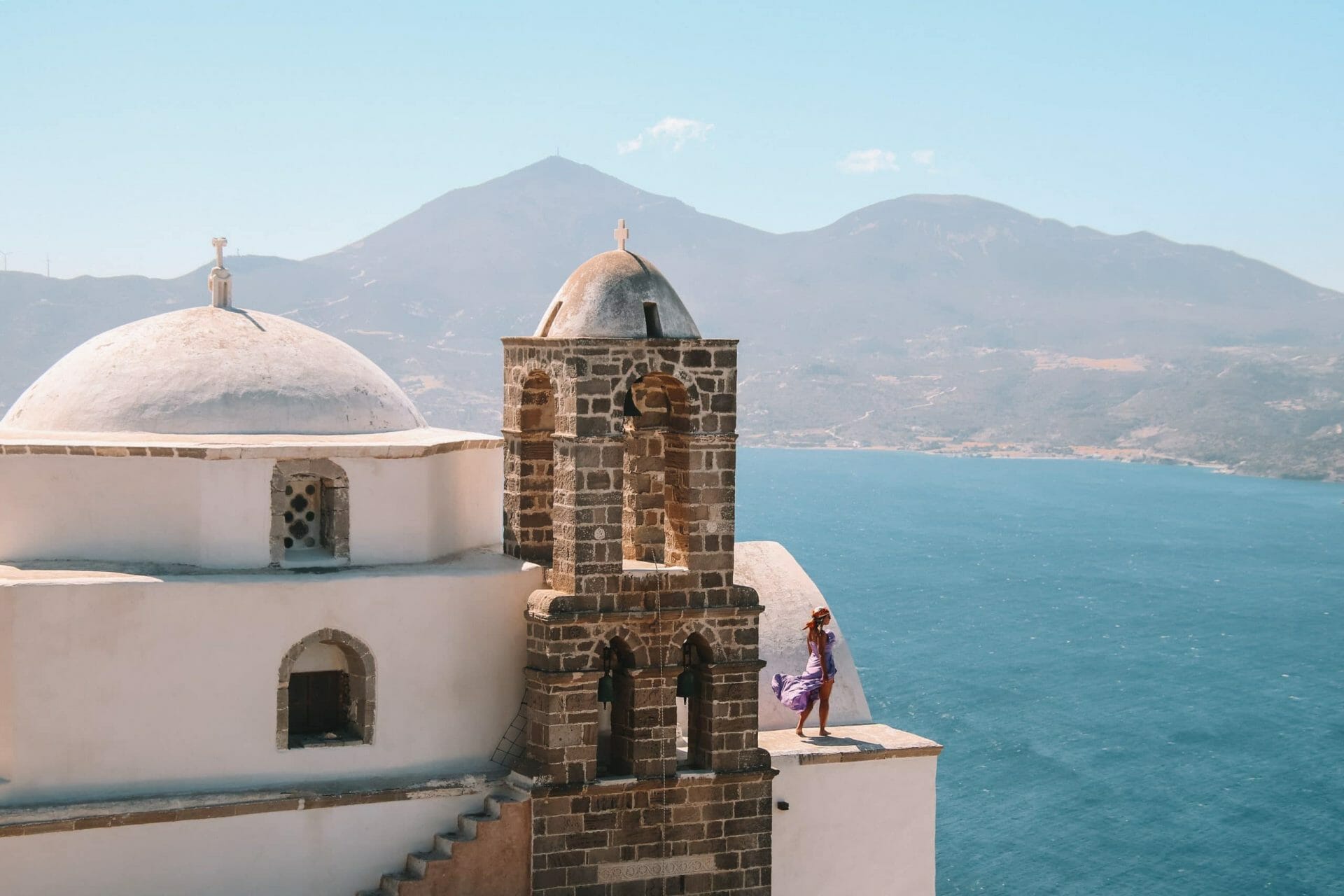 The Cyclades is an archipelago that belongs to Greece and is located in Aegean Sea between Athens and Crete. In total, the group consists of 56 islands. Some of them are inhabited. The Cyclades are known for its whitewashed houses, blue domed churches, idyllic streets, windmills and beautiful beaches.

Did you know that the Cyclades lend themselves perfectly for island hopping? We visited Athens and four islands in 12 days (we visited Santorini before, but this island really shouldn’t be missing from the list). Because I can well imagine that it is difficult to determine which islands you want to visit exactly, I have created a travel guide for the perfect round trip in two weeks.

We visited the following islands: 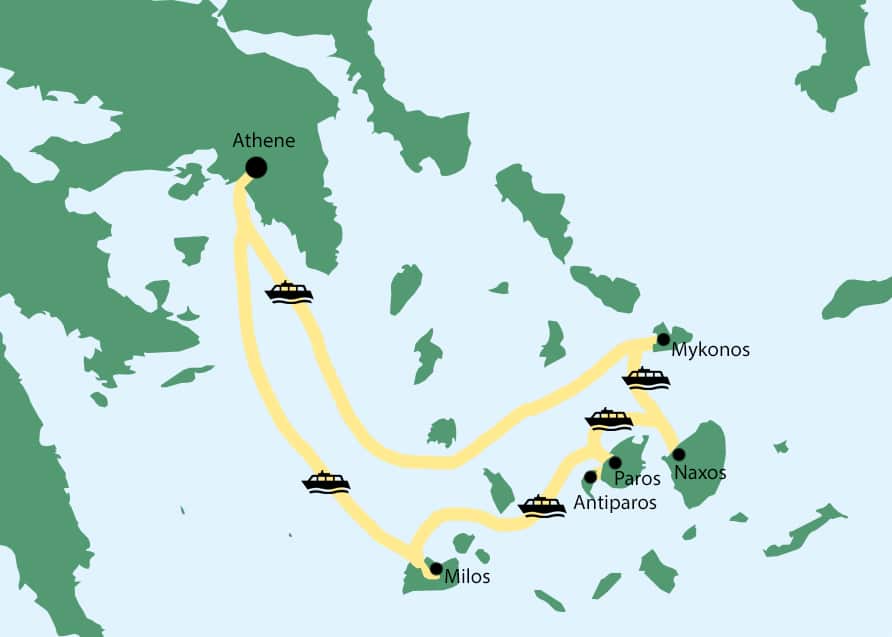 Athens is the capital city and also the largest city of Greece. Although Athens is not part of the Cyclades, the city is perfect as a starting point for your trip to the Cyclades. Flights to Athens can be found here!

The airport of Athens has, as one of the few cities in Europe, a direct metro and train connection with the city center. We bought a 90 minute metro ticket for € 9,- per person to the city center. This took us about 50 minutes.

Note: Buy an Airport Ticket! A normal 90 minutes ticket is not valid for the ride to and from the airport, but only in the city itself.

Things to do in Athens

One of the most popular sights in Athens is the Parthenon, Greece’s most famous temple built on top of the Acropolis mountain. Other places to visit in Athens include the Ancient Agora, the Panathinaiko stadium, where the very first Olympic Games took place, and numerous trendy restaurants and bars.

We stayed for two nights at the Enattica Monastiraki Living, a fine accommodation in the lively Monastiraki district. This district is the place to be, because all the nice restaurants and bars are located here. Another good option is 24K Athena Suites. This accommodation is located in the same district and from their penthouse, you even have a view over the Acropolis and Parthenon!

Island hopping in the Cyclades

The Cyclades is an island group that you can easily travel by ferry. You can choose from 56 different islands, such as Andros, Amorgos, Ios, Mykonos, Naxos, Paros, Santorini, Sifnos, Syros and Tinos. Each island is slightly different and there are different sights and things to do. We researched well in advance which islands we would like to visit and then molded them into some sort of plan. However, because we were not traveling in the high season, we only decided on the day itself which ferry we would take and were therefore reasonably flexible. Do you have a tight schedule and travel in high season? Then I recommend you to book the tickets in advance! The ferries can be fully booked very quickly.

To find the best ferry tickets we used the website DirectFerries.com. This website provides an overview of all ferries departing on a certain day, how long they take and what the prices are. This can vary from company to company. We ended up booking the tickets directly through the website of the chosen ferry company, because that’s a few euros cheaper. Booking tickets is easy and can be done in English.

Please note that delays occur regularly, so departure times are constantly changing. You can keep a close eye on your ferry via vesselfinder.com, so that you don’t arrive way too early at the dock.

Tip: Do you get seasick easily? Then choose a large ferry instead of a smaller, faster boat. The journey takes a little longer, but you’ll be much less affected by the weather conditions. The sea can be very rough!

From Athens we took the ferry to Mykonos. For the trip from Athens to Mykonos, we used the company Seajeats. Their ferry, the Worldchampion Jet, departed from the port of Piraeus and sailed to Mykonos in 2.5 hours.

By the way, this port of Piraeus is easily accessible by metro. It took us 40 minutes to get from our hotel in Monastiraki to the port. A 90 minute metro ticket cost € 1.20 per person.

Things to do on Mykonos

Mykonos is one of those islands that you often see back on postcards. Here you find those typical narrow streets with whitewashed houses and blue domed churches. The island is known as a paradise for the international jet set and there is a lot of partying going on. But also if you are not into partying, there is plenty of other things to see and to do. Some things not miss in Mykonos are the Flour Mills, Little Venice, the beautiful beaches and of course the center of Mykonos Town.

A nice way to discover the island is by scooter, because that way you can be flexible with where you choose to go. We rented a scooter for € 15,- per day during low season.

Mykonos is, together with Santorini, one of the most popular destinations in Greece. So keep in mind that it can be very busy. We were there in low season and still several cruise ships arrived every day.

We stayed 2 nights on Mykonos and slept in Casa Anna Suites & Pool, a very nice accommodation within walking distance of Mykonos Town. Do you have a bigger budget? Arcs Boutique Villa Hotel is located in Mykonos Town and offers suites en villas with a view over the sea!

After spending three days on Mykonos, we took the ferry to Naxos. This time we sailed with a ferry from Fast Ferries. This slow ferry took about 2.5 hours and tickets cost € 25 per person.

Things to do on Naxos

Naxos is the largest island of the Cyclades and is quite hilly. Hence, we chose to rent a car here to explore the island instead of a scooter or ATV. The rental car cost € 30, – per day during low season.

On Naxos you will find some beautiful, golden sandy beaches and cute villages. These villages are not the typical villages, as you find them on Mykonos, but they are very cute and cozy. Furthermore, you will find here the Kouros of Apollonas (a colossal, reclining statue), Portara (the gate of an unfinished temple) and the temple of Dimitra. Naxos is primarily an island for relaxation or walking and is therefore very popular among families and couples.

We stayed two nights on Naxos and slept in the Junior Suite of the Korali Palace Hotel. This room was really perfect and features its own private pool with waterfall and bubbles and the ability to watch Netflix via a beamer (in the pool!).

From Naxos we took another ferry to Paros. This time with Blue Star Ferries for € 5.50 per person. Since Naxos and Paros are next to eachother, this trip only took 50 minutes.

Things to do on Paros

Paros is my favorite of all the islands we visited! This island is at least as beautiful as Mykonos and Santorini, maybe even more beautiful, only it’s much less crowded here. Sounds amazing right?!

Paros is the third largest island of the Cyclades, after Naxos and Andros. You will find cute little villages like Naoussa, Lefkes and the capital Parikia, all filled with whitewashed houses, churches and colorful flowers. The island also has a number of beautiful beaches, where you can relax after strolling through all those beautiful towns.

We slept two nights in Krotiri View Paros, a very nice accommodation with a pool overlooking Parikia. Keep in mind that Krotiri is located on a hill and the road to it is a bumpy dirt road.

Just like in Mykonos, we rented a scooter to explore the island. The costs were € 15,- per day.

Next to Paros you will find the small island of Antiparos, which you can easily visit by ferry. The crossing only takes 10 minutes. Do you rent a scooter on Paros like we did? Then you can take the scooter on the ferry, so you also have transportation on Antiparos. On Antiparos you will find an ancient cave with stalagmites and stalactites and nice restaurants where they sell fresh calamari. Definitely worth a visit!

The last island we visited during this round trip through the Cyclades is Milos, also known as Melos. The ferry  we booked from Seajets was nearly three hours late due to the high winds and the trip to Milos was not flawless either. Due to the strong wind there were high waves andmany people became very nauseous on the boat.

Milos is a volcanic island. You will find a special natural phenomenon, called Sarakiniko, which is also named the moon landscape. Furthermore, the island of Milos has very cute fishing villages, such as Mandrakia, Klima and Firopotamos. In addition, you will also find fantastic beaches with very clear waters. A visit to Kleftiko Bay is absolutely not to be missed when visiting Milos.

We stayed two nights on the island and slept in L’arco Suites, a very nice and spacious apartment located in Adamas, the capital of Milos.

We visited this island before and not during this round trip, but a visit to the island of Santorini is really not to be missed if you’re in the area. Although it is super touristy, it is definitely worth a visit. Enjoy a beautiful sunset in Oia, discover the different villages and go and relax at one of the volcanic beaches.

From Milos we traveled back to Athens and this trip with the ferry of Seajets took about 3 hours and cost € 58,- per person.

The last day in Athens we had a nice stroll around and went to a rooftop bar, the 360 cocktail bar. They serve delicious (but expensive) cocktails, good food and from here you have a beautiful view of the Acropolis and the Parthenon. 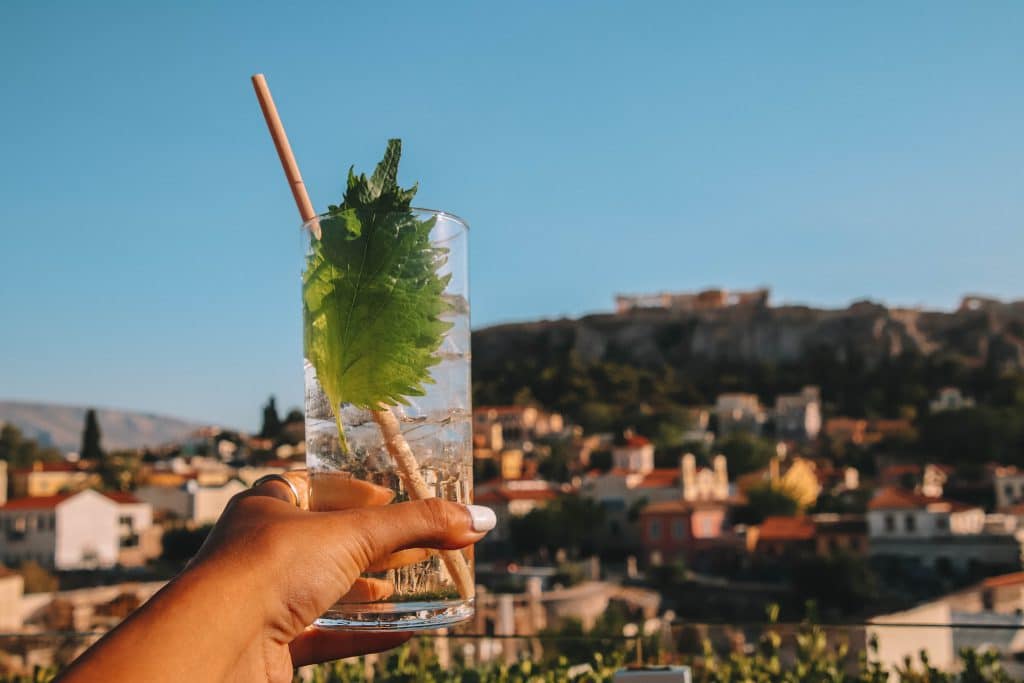 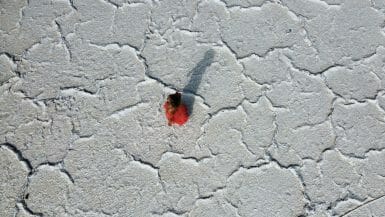 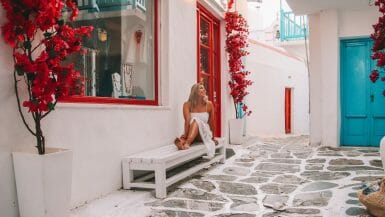 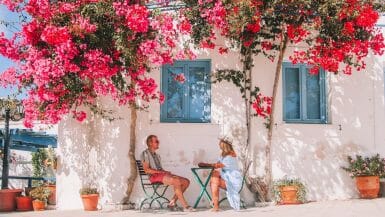 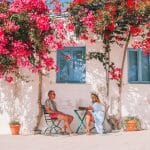 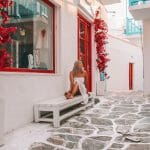 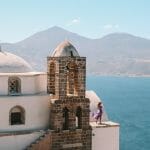 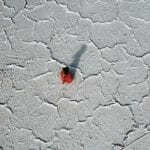